COWICHAN VALLEY – Handing over the keys is their favourite moment.

For 30 years now, K2 Construction founder Kevin Fraser and his team have crafted homes for their Cowichan Valley neighbours. Driving around town they see their work. Visiting the grocery store, they are greeted by previous clients.

“Throughout the project, we form a strong bond,” Fraser said. “At the end, we give them the keys to their new well-built home, genuinely adding value to their lives.”

Site supervisor Rick Porter, who has worked with Fraser for 27 years, agrees, saying “At the end of the job, it’s always nice to hand the keys to the homeowner for a brand-new, sparkly, well-built house.”

Constructing a well-built house is a coordinated process honed over decades. When Fraser founded K2 Construction in 1989, he wanted a company that was well-respected for its workmanship, solid core values, and delivering as promised. His vision was backed with experience and education: He had University of BC diplomas in appraisal, finance and management, a decade of hands-on carpentry and more than 20 years’ experience in construction management.

Now 30 years later, he has built K2 into a reputable builder of custom homes and acknowledges there were some bumps along the way, most being shifts in the market and changes in the industry. A decade after he started his business, there was an economic downturn, starting in 1999, and construction contracts just dried up.

K2 was still a relatively young company, busy building its reputation and developing the company’s networks, so the recession hit hard.

Fraser kept the company solvent by being flexible. When contracts dwindled, he switched his team to general contracting, building spec homes, commercial buildings and handling renovations.

“Construction was a challenging career to take on but I managed to weather the industry downturns,” he recalls. In the mid 2000’s, the company was invited to do several joint venture housing projects, at the same time clients also began requesting custom homes again.
In 2007, with the joint ventures completed, Fraser re-focused his company solely on its core custom home business. These are Fraser’s favourite builds.

“We find it rewarding to help a family through the process of creating their home,” he says, adding that some clients enter the process with apprehension, either from previous experience or media reports about difficult contractors.

K2 works directly with the family on implementing their vision for their home, while keeping the process as stress-free and enjoyable as possible. It’s not unusual that, by the end of the build, the new homeowners are inviting the K2 team over for a celebratory barbecue. They often also become friends.

“We’ll meet these people in the community for the next 5- 10 or more years,” he says.

When the economy dipped after the financial crisis of 2008, K2 was well-enough established in the Cowichan Valley that the contracts continued to flow in.

Roughly half of K2’s clients are already residents of the Cowichan Valley, and the remainder are new arrivals. Ages range from young families and middle-aged baby boomers with teens, to empty-nesters building their retirement dream home.

Some hear of K2 by word-of-mouth, or from testimonials on the company’s website.

“The best indicator of high-quality workmanship and pride is what people do with the parts of a home that you cannot see when it is complete. After watching our home and others around us being built, it is obvious that the quality and pride of K2 is far above the rest of the industry.”

“Not only did they (K2) keep their promises, they added value in numerous ways, in suggestions on a better way to do things, how to save me money without compromising quality, again a highly valuable trait that unfortunately many companies today do not offer. But K2 does!”

“This is how house construction should always be. On time – in fact a week early – and under budget, yet nothing but top quality from top to bottom. We did our homework and learned that K2 was the best in the Valley and well worth waiting for;”

Because of its popularity, K2 is tasked with managing demand, meaning sometimes clients must wait for an opening in their schedule.

“We’re always careful not to take on more than we can thoroughly manage,” Fraser says, noting that at times, the company turns away as many contracts as it accepts. At any one time, K2 will have three to four simultaneous builds underway, all of them meticulously planned to make the most of every hour.
Porter oversees the stages, drawing on his experience with K2 to ensure every project stays on its interlocked schedule. He has also mentored Jared Morton, who joined the company 12 years ago, to give K2 a second expert site supervisor.

Porter describes the sequencing of a typical job with a fluidity, as each trade comes in on time and merges into the next section. First the foundation, then the initial framing, usually overseen by Morton. Porter comes onto the site just before the mechanical trades. He monitors the finishing framing. Plumbers, HVAC, and electrical enter on cue to complete their installations.

Details are important. For example, Porter makes sure the electricians install switch boxes at the same height, using a laser level to confirm the alignment. This is especially important above counters. It ensures that when a tile backsplash is added later, tile cuts and grout lines will be perfectly straight.
The next steps are insulation and drywall, followed by primer and the first coat of paint. Paint is the start of the visible finishing. It leads into flooring, tile and stonework. The finish carpenter does a star turn as cabinets and woodwork are installed.
Porter lends a hand when needed, but otherwise sees himself as a conductor, noting “I ensure the tradespeople come when required and complete what they need to complete on schedule.”

The schedule is important. When multiple homes are being constructed, the projects are synchronized in sequence so no time is wasted waiting on trades. Sub-trades are scheduled so they can move from house to house, finishing up their part of the project in one house, then moving to the next. Having worked with many of the sub-trades for a decade or more, Porter knows they will meet the schedule.

He enjoys seeing homeowners stop by the job site, especially if they have not been able to visit for a few weeks, and seeing their response to how far the project has progressed from the last time they saw it.

“We show up to an empty lot and a few months later, there’s a house,” he says. “I get a good sense of accomplishment from that because we’re creating a product.”

For clients who cannot visit the build site, K2 shares frequent updates and images via the internet. Communication is constant, so homeowners are linked in real time and able to provide input on the project as it is being built.
K2 also uses software for estimating, project management, and budget tracking to keep the entire build on schedule and on budget. For Morton, software is a tool that supports his commitment to the clients.

“If I said we’re going to have your house locked up by November 14, I’ll do everything I can to make that happen,” he says.

Fraser developed the K2 team by looking for people with that same work ethic and attitude, pointing out that often, attitude is more important than experience.

Porter joined K2 in 1992. He had worked in construction and helped his dad build the family home, but then found work in island sawmills. However, he was looking for something more stable in terms of employment, met Fraser, was impressed, and never looked back.

“I thought he was the best builder I worked with,” he recalls. “He started showing me the ropes – most importantly the need to be accurate so that everything is square, strong and built correctly.”
In 2007, Morton had completed his pre-apprenticeship carpentry program at Vancouver Island University. He asked his instructor to recommend a reputable company, where he could work and gain the right kind of skills, and was pointed towards K-2.
“That was the first one I talked to – and the last one I talked to,” Morton says, adding he has worked for K-2 ever since. He is now a lead carpenter and site supervisor.

Hiring Greenway was part of Fraser’s succession plan for K2. Key staff have always received shares in the company and now two of those shareholders are preparing to take over. After Morton joined K2 in 2007, he demonstrated enough commitment to become a minority shareholder, which took place four years ago. Within the next year, he will become a co-owner.

The other co-owner will be Greenway. He was selected to join the company in 2016 because his skills and background perfectly complemented Morton as a future co-owner. Together they have the attitudes, construction background, and project management skills to maintain K2’s reputation and standards.

Morton and Greenway plan to take over the company sometime in 2020. Fraser is looking forward to semi-retirement although he will be available as a consultant to K2. Porter hopes to keep working, adding “I can’t quite retire yet so hopefully they’ll hire me back for a year or two.”

As pending co-owners, Morton and Greenway recognize the constant shifts that exist in the construction industry. That includes continuing to navigate increasing environmental regulations including flood and earthquake protection; dealing with increased scrutiny of building materials; and meet demands that homes be eco-friendly, energy-efficient, and cost-effective.

Greenway also deals with all the new regulatory requirements and changes. Some are directly aimed at development and construction while others, like the mortgage stress-test, have a broader impact on the housing market.

The team is tasked with protecting the K2 standard and reputation in an increasingly challenging market, and is  confident it can succeed.

Some of the building lots their projects are on present their own unique sets of circumstances.

Greenway notes that, for example, available waterfront lots in the Cowichan Valley tend to be steeper, rocky, and heavily treed. Carving out a building site can require blasting, which creates another layer of dealing with bureaucracy.

“The easy stuff has long since been built on,” he said. “The properties we’re looking at now come with a whole new set of challenges.”
To date, K2 has always found a way to make it work, even as costs continue to rise, along with expectations. Over the three decades, Fraser has noticed an uptick in the demand for luxury items like hardwood floors, granite countertops, steam showers and soaker tubs. At the same time, operating costs are dropping as homes are better-built and heating/cooling system become more energy efficient.

Another factor is the internet, which offers homeowners inspiration from projects around the world, as well as in-progress access to viewing their jobs online.

With all the changes, Greenway and Morton are looking forward to, and up to the challenges and opportunities that await K2 Construction, because they “want to keep handing over those keys.
“It’s incredibly rewarding to build a home for a family, to go through all those hurdles, and then to hand over the keys with a big smile and hug,” Greenway says. 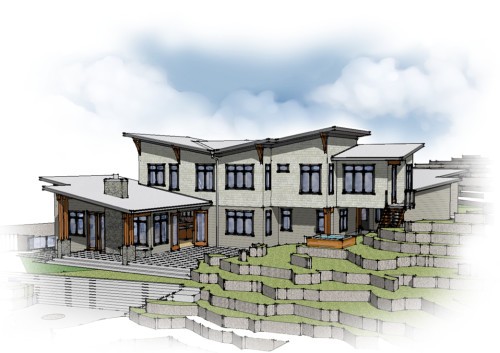